The Sale of Ashdown Forest ... and how it was saved for the nation 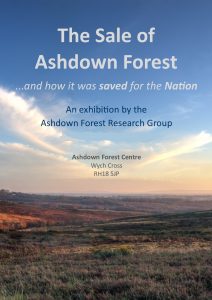 Thirty-five years ago Ashdown Forest came within a whisker of being broken up and sold off piecemeal to private investors, with potentially devastating consequences for the preservation of its cherished landscape and continued public access.

It was in 1987 that the Lord of the Manor, the 10th Earl De La Warr, announced that he had decided to sell Ashdown Forest. He offered first refusal to East Sussex County Council, but the council was only able to pay a fraction of the asking price. The council’s predicament triggered an urgent campaign, led by the Friends of Ashdown Forest, to raise the required funds that would ensure the purchase of the Forest and save it for the nation.

The high profile appeal excited national and international media attention, and attracted the support of celebrities like Christopher Robin Milne (of Winnie-the-Pooh fame) and the film star Dirk Bogarde. Donations flooded in from far and wide.

The Ashdown Forest Research Group has discovered a book that lists the names of almost two thousand people and organisations that contributed to the appeal. The exhibition tells some of their stories and the support that they gave, including not only the famous – like Christopher Milne and Dirk Bogarde – but the less well-known who were similarly keen to see Ashdown Forest saved for posterity.

The exhibition also explores two other major crises that Ashdown Forest faced in 1987 — oil exploration and the ‘Hurricane’.

Finally, the exhibition sets the sale of Ashdown Forest in the 1980s against its history, from its emergence as a deer hunting park in the Middle Ages through to the establishment of the Board of Conservators in 1885 and the challenges faced by the Forest today.

If you would like to know more about what was happening on Ashdown over 30 years ago, would like to revisit old memories, or learn more about the history of the Forest and the future that lies ahead, please do come and see our exhibition.

The exhibition is in the visitor centre at the Ashdown Forest Centre until the end of June.  Please check the opening times with the office if you are making a special journey.